Ditching the language of moderation

Have you noticed some of the new terminology around climate change? For example, at the University of York they’re talking about the “Post Crash City“ at a seminar series for the Centre for Urban Research. It’s their way of describing life in conditions of economic decline, but it has such a devastating ring to it, I think they could go further…

The Tyndall Centre for Climate Change Research is talking about how policy makers can deal with “uncomfortable knowledge” that we are now almost surely heading for a climate warming above the 2 degree level. That level was thought to be the threshold below which the worst effects could be avoided.

Meanwhile, the journal Nature has developed estimates for when cities around the world will reach “climate departure“—the point at which average temperatures are affected by climate change so much that old climate patterns end. The Washington Post used the data to make this map showing dates for major cities—with and without mitigation efforts. 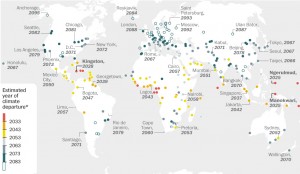 Then there’s the upcoming conference, also associated with Tyndall, on radical emissions reductions and radical mitigation. They convincingly argue that, “No longer is there a non-radical option.”

Similarly, our friends at Post Carbon Institute and Transition Network are arguing, in their recent report Climate after Growth, for us to acknowledge “new normals” including a new energy normal (post carbon), and new economic normal (post growth) and a new climate normal (post stability). (See, this is where the “post crash city” term might come in handy.)

I mentioned to the authors at the Post Carbon Institute that from a design perspective we should add to the list a new material normal. Some might see “material” as bound up in “energy” but ultimately designers use materials and space to show people positive visions of a post growth paradigm, both visually and experientially. By manipulating material and spaces, designers create a lot of the interface for how people experience energy and economy “normals” in daily life.

And to wrap up, we have fossil dependence as the new apartheid, the newest cultural pattern— “profiting from wrecking the climate”—to be widely recognized as wrong. To end it, there’s a movement that asks investement funds and individuals not to invest in, and to withdraw investments from, fossil resources companies such as oil and gas. Articles from, for example, Harvard, FossilFree and Business Green discuss the issue.

On the whole, I’m encouraged by this move away from moderation. What are your favorites in this new landscape of terminology, and do you have any to add?