Weekend before last I went along to the London 3D print show to see the cutting edge of this emerging field. Very Interesting. There was a 3D printed car, along with other 3D printed items such as shoes, toys, medical models, equipment for international development, and even Thor’s hammer, as used in the feature film.

But to get back on topic here, 3D printing, in my view, facilitates the activist tactic of community organizing. In the book Architecture & Design versus Consumerism I write that “At its core, organizing involves working with people so that they develop a capacity to solve their own problems across a range of issues such as neighborhood renewal, education, employment and social networks.” 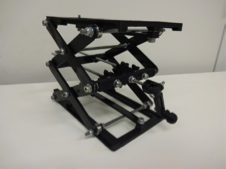 A professor at Michigan Technological University was converted to open source 3D printing of lab equipment when he realized he could “print” this $1,000 lab jack for five bucks.

Shortly after visiting the London 3D Print show I came across this article about how a university academic, Joshua Pearce, is using 3D printing to produce simple lab equipment that costs a fortune.

Not only is he using a cheap 3D printer to print out lab eqipment, but he’s also making his knowledge available through an open source effort and his new book, Open-Source Lab: How to Build Your Own Hardware and Reduce Research Costs.

Saving money is just the half of it. ‘This lets faculty have total control over their laboratory,’ he said. Because designs are fluid, ‘devices can evolve with your lab rather than become obsolete.’

As this example suggests, an important way that community organizing manifests in design is through do-it-yourself, self build, and “maker” projects where technology and skills are transferred, at least in part, to community groups.

This type of “design-based” organizing occurs in prayer spaces, school rooms, portable urban gardens and the lab equipment mentioned above. Once the community can fabricate, assemble, adjust and disassemble the necessary structures and tools, there’s no longer reliance on a central authority to control the process. Organizing disrupts typical, centralized systems of power, shifting decision making and fabrication from the hands of experts to the hands of regular people.

In the case of lab equipment, the decentralization of power and authority becomes more clear with Pearce’s vision for open source equipment. Not only are scientists from all over the world helping each other develop and modify lab equipment, but also scientists in China, India and Africa have the potential to build themselves top-notch, but affordable labs, creating a truly global scientific community.

Find this blog interesting? Share it with a friend. If you’re involved in sustainable design, check out my Thursday post on new guidance on teaching “sustainable development (and design).”

Recently I attended a workshop hosted by the London group “Technology will Save Us” (I’ll call them TWSU to save some words). I also saw the exhibit Adhocracy on view in London’s Lime Wharf, featuring a bunch of interesting ideas for open design, distributed manufacturing, and digital fabrication technologies. The range of ideas in the… END_OF_DOCUMENT_TOKEN_TO_BE_REPLACED