Is it something about October? Or is activism really taking off in the design community?

Architectural Record offers a special issue on socially responsible design for October 2008, while Metropolis’ October 2008 issue is thematically dedicated to design activism as well. Creative Review’s October 2008 issue had a cover story by Jody Boehnert on design activism (disclosure, I am cited in the article).  While over at Fast Company, they are critiquing the troubles of William McDonough, previously thought of as activist #1 in green building, while highlighting other efforts on design for social change. 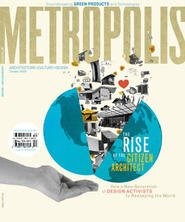 In the blogsphere, over on Core77 there is an October “feature” by Mariana Amatullo offering a lengthy and inspiring look at the design for social change work in the “Design Matters” program at Art Center College of Design.

Have I missed anything?

Filed Under: resources
← Ethics – what is better? (4/4)
matching designers to activist opportunities →