In the previous post I introduced the idea of a form of hippocratic oath for designers, and shared some examples of how the medical hippocratic oath has been adapted for landscape, lighting, graphic, and UX (user experience) design. In this post I turn our attention to product designers.

Several practitioners and design observers have pondered the idea of an oath for product designers.

Over on Core77, aimed at product design Emily Pilloton, of Project H and the recent book, Design Revolution: 100 Products that Empower People, mentions the idea of a hippocratic oath for product designers. The book includes a “designer’s handshake” which she describes as a version of the hippocratic oath. Hers includes items such as:
– go beyond doing no harm
– measure, share, and teach
– serve the underserved
– don’t reinvent the wheel
– put the user first
– be part of a greater whole
Her idea is that people sign this oath and send it back to her, and that taking this action helps people feel the weight of the commitment more. 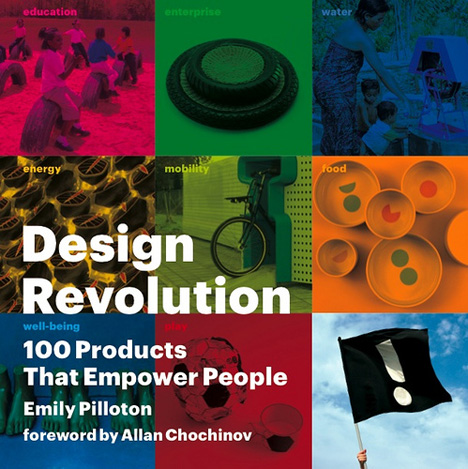 One of the founders of core77, Alan Chochinov has also developed a version of an oath for designers, although he calls his a “manifesto for sustainable design” (I wrote about design manifestos before here). He starts off highlighting the point that industrial designers don’t just deal with one patient at a time, the way doctors do, rather, “We have to remember that industrial design equals mass production, and that every move, every decision, every curve we specify is multiplied–sometimes by the thousands and often by the millions. And that every one of those everys has a price.”
The points in his oath include items such as:
– stop making crap
– put systems before artefacts
– teach sustainability early
– ensure balance before catering to talents
– put metrics before magic
– put climates before primates
– context before all else

He’s purposefully kept this at 1000 words, which is perhaps a bit long for an oath, but as he says, it’s a manifesto.

The Designers Accord is more than a “manifesto,” but it is also less than a binding oath. To sign up to the accord, one commits to five guidelines. The emphasis of the designers accord seems to be on institutional signatories, in the same way that institutions such as states or global businesses might sign on to international accords on trade. Interestingly, the commitment for individuals who sign the designers accord reads very differently than the commitment for institutions, and it highlights the difference–some might say the double standard–between what we expect of individuals and what we accept from larger institutions.

Under the category of individual adopters the accord says: “All adopters, supporters, and endorsers follow a basic code of conduct: Do no harm; Communicate and collaborate; Keep learning, keep teaching; Instigate meaningful change; Make theory action.”

However the five guidelines given for the institutional adopters don’t mention “do no harm,” instead they mention “reducing impact,” which we might read as “lessen harm.” On the one hand this is a very realistic and practical approach for Designers Accord to take. And it’s something I talk about in my book as one of the central debates of sustainable design. To what degree do we need sudden radical change–the kind of change that would require companies to “do no harm”- rather than “lessen harm”- and to what extent do we need to maintain some level of “system stability” to enable cohesive transformation? The book also examines broader implications of “time” for sustainable design.

I notice too that the Designers Accord is now “a five-year project started in 2007” so one has to wonder what happens to people’s commitments after that period. It’s hard to believe that all practices will be transformed in that time period, so perhaps the commitments will be transferred to the main professional design organizations, or Designers Accord will launch phase 2. Again I don’t fault Designers Accord for setting a limit on their organizational lifetime. It’s an idea that probably should be considered by more groups. (The Dutch have used this model successfully to look at specific issues, particularly through the Eternally Yours project, which also lasted five years and left a lasting mark on the toolbox of sustainable design, with concepts such as design for durability, heirloom design, and graceful ageing of surfaces.)

This leads us to a final view on a hippocratic oath for designers that counters the guideline-y approach of Designers Accord. John Thackara (for this link see the post dated May 28, 2009) wisely argues for designers to take a view beyond human life, which is the focus of the medical hippocratic oath. Instead he notes, in his advice to the newly formed Finnish Aalto University, that it should stand for “an unconditional respect for life, and for the conditions that support life.” Thackara writes:
“Such a commitment would be stronger than the hippocratic oath sworn by doctors. Young doctors promise to ‘prescribe regimens for the good of my patients according to my ability and my judgment – and never do harm to anyone.’ Unambiguous respect for human life here – but no mention of the rest of life!”

He traces this line of ethical thinking back to Aldo Leopold’s “land ethic.” Further, Thackara concludes by stressing the notion of an unconditional respect for life. He comments:

Unconditional does not mean generating “less waste than any of our competitors” – it means a commitment to zero waste, and zero emissions.

Neither does an unconditional commitment to the biosphere mean adding environment courses to a curriculum that otherwise remains untouched. 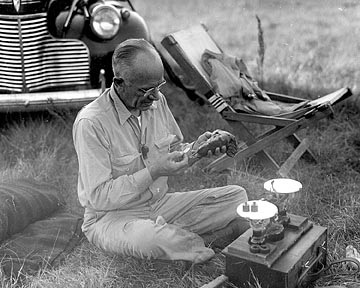 Aldo Leopold conducts field research in this 1946 photo. (Photo courtesy of the University of Wisconsin archives)

Where does this leave us?

So we have a variety of “oaths” and “commitments” described here. One thing I really like about all of them is the strong component of teaching and learning, just as in the older style hippocratic oath which states, “to consider dear to me, as my parents, him who taught me this art; to live in common with him and, if necessary, to share my goods with him; To look upon his children as my own brothers, to teach them this art.” This is watered down in the more contemporary version with the statement, “May I always act so as to preserve the finest traditions of my calling.”

We can see a tension that makes a hippocratic-style oath for designers challenging. On the one hand we have the aspiration of “unconditional respect for life,” a sort of all encompassing “do no harm” that makes more sense for designers’ scope of work. On the other hand we have the practical reality of confronting the market place, where most designers work. The market place contains those large, powerful, monied organizations (like businesses that sign on to the Designers Accord) whose primary goal is to maximize financial return to shareholders, at any reasonable environmental or social costs. Design seems to require a hippocratic-type oath that somehow connects the practical end of the spectrum with the aspirational end of the spectrum, but is the tension between these two ultimately insurmountable? What are your thoughts? Are you familiar with other adapted ethical oaths for product/industrial designers?

Next week we conclude this series with a look at architecture.

Finally, quick reminder that I would like to get your input on design activism, through the short survey found here:

(you can enter to win a drawing for an Amazon gift voucher).