A Recent post by John Thackara on Design Observer led me to consider the prospects of design activism gone wrong. Thackara suggests that recent efforts by Architecture for Humanity and AMD, to design and build community internet centers, have missed the boat, as have efforts to design $100 laptops. In his view, other mobile technologies such as phones are quickly and more cheaply replacing the need for equipment that is far too expensive–even at $100–for populations of poor countries. His general point is that far from “teaching” developing countries how to do things, we in developed countries need to learn from their existing and inventive solutions using existing, cheap, low-energy-intensive technologies.

Although I don’t entirely agree with Thackara’s criticism of Architecture for Humanity and $100 computer initiatives, I do agree that activism can go wrong, or be perceived to go wrong. Here are a few examples.

The Red Cross
The San Francisco, Bay Area chapter of the Red Cross ran a campaign on earthquake preparedness with the tagline, “what do we have to do to get your attention.” They used portable billboards to create the illusion of well known buildings destroyed by earthquake. Karrie Jacobs , in a report in Metropolis Magazine, noted that at least one viewer did not appreciate the “scare tactic” and said, “It almost makes me regret the many times I’ve given money to them.” The point was to get people’s attention, because despite repeated earthquake preparedness campaigns, surveys show that only 6% of Bay Area residents are ready for a big one, and the figure stubbornly refuses to climb. Activists generally strive for media attention to bring their message to the target audiences -those who can enact change or change their behavior. But did the Red Cross judge their audience well enough? 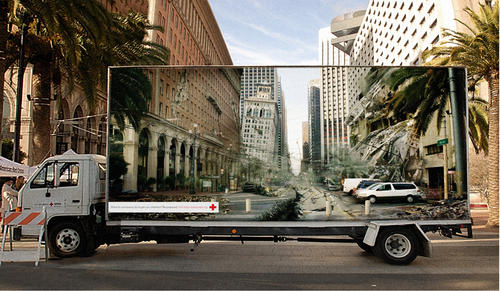 Recycled Materials
A number of design activists stress the value of recycling and using recycled materials, but more than one critic has pointed out the potential inconvenience of creating supply chains that rely on streams of waste material. Does creating products out of recycled waste material basically guarantee a waste stream? A conflict of interest could arise when producers need a steady stream of waste to produce their products, and so wouldn’t want consumers to create less waste. I originally heard Pete Grogan, then at Weyerhauser (the forest and paper company), suggest this back in the late 1990s. McDonough and Brangaurt pick up on this idea in their book, Cradle to Cradle, by investigating how recycling perpetuates undesirable chemicals that find new life in inappropriate uses when one material is recycled into another that it was not intended for. Have design activists in this case been thinking too small about the changes that are needed?

PET, commonly recycled into other products
it was not initially intended for

Postwar Reconstruction
As urban civil conflicts become increasingly common, more architects are taking their activism into the effort of reconstruction. But Esther Charlesworth, founder of Architects without Frontiers and author of a book of the same name, notes that this arena is fraught with difficulties. In her own experiences in Bosnia, designers were involved in efforts to recreate iconic monuments (such as the Stari Most Bridge in Mostar), while many more significant design needs were ignored. She writes of her disillusionment with foreign architects (activists by another name), working in post-conflict cities, “Generally, they had little experience of working in divided political and physical landscapes and, as a result, tended to produce (and impose) quick fix design strategies that are attractive to international donors but which invariably denied or, in some cases, accelerated the underlying causes of conflict.” Charlesworth even has a term for this, “Trauma-Glam,” which she attributes to Richard Becherer. Have some humanitarian-aid architects gotten priorities wrong?

Conclusion
Activism can go wrong for any number of reasons, and we’ve seen a few here. Activists can answer the wrong question – as Thackara thinks some design activists working in development have. They can misjudge likely responses, as the Red Cross may have done. Activists can think too small, in the way that some critics think design using recycled materials may be doing. And activists can lose sight of priority issues, as some foreign architects might do when they get involved in post-war reconstruction.

One difficulty we have in assessing design activism is that although “actions” are often reported as news, we don’t necessarily find out how effective the actions were in moving the cause forward. If $100 laptops were to appeal to international funders to buy for third world schools, and not as Thackara suggests, for individual families to buy, then perhaps they would do some good. If the Red Cross shock tactic did get more people to prepare for an earthquake, then they achieved their aim. These reports that assess the outcome of activism are often missing, just as assessments of how various designed products and buildings perform in real life are also often missing.

Do you have any cases of “design activism gone wrong” to share?