Activism is all about taking action to bring about change. It is, ultimately, about disrupting the status quo. There are many ways to create the disruption, but when we start looking at how designers do it, one approach is to involve people in a process. It strikes me that “process” has a few different dimensions. 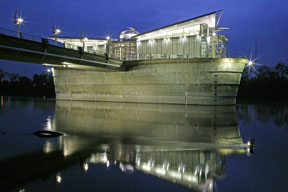 technical infrastructure as a platform for social participation. The Lionakis-designed water intake structure on the Sacramento River. Image John Swain.

In its less political dimension, participation might simply mean involving people in a supply chain with your new, ecologically preferable material and how to handle or form it. Going through the process, people in the supply chain emerge on the other side of “status quo” with knowledge and ability to use a more ecologically favorable material. Consumers may not really notice that much of a difference. Classic examples would be biodegradable plastic or the famous DesignTex fabric.

Architecture, landscape architecture and product design also all have methods for user participation. Examples include watching how people use things, asking people to make simple clay models, having people test a prototype, or involving users in assembly or construction.

A number of people are now struggling not just with how to involve people in the design process, but how to design processes and services that cultivate ongoing participation. Participation breaks the old status quo of isolation, individualism or even consumerism. This new flavor to participatory design may be partly due to digital networks, but also partly due to the rising interest in social innovation (see the Young Foundation, this report and this report on social innovation).

Similarly, the urban hitchhiking project in Belgium, by the Sustainable Everyday group (images and description in French here), investigated what could happen if “hitchhiking” were formalized within a city, where people join a hitchhiking club with an agreement to pick up people when they can and hitch at other times. In both cases we have the same vehicles but different social relationships that facilitate new uses.

Platforms for participation
Tim Brown of IDEO has recently posted to his blog, “how might we design a participatory system?”. Implicit in social innovation terms is the notion of “community” rather than just participating individually in an activity or process.

From an activist perspective I don’t agree with Tim’s assertion that “any participatory offering must make effective use of the internet,” since smaller, physical participatory systems have great value as well. But I do agree that a central element is a platform through which people participate. I see design activists using a few different platforms:

Virtual platforms:
The NY Chapter of the American Institute of Architects offers
The Public Information Exchange, a web-based platform that allows architects and developers to post their project where community groups and enthusiasts can comment directly on the project as it develops, thus taking participation out of the formal planning and approval meetings. Interestingly some projects on PIE have thousands of comments, where others have few.

Physical platforms:
An example of new physical platforms for participation include recent efforts to find social services in previously technical facilities (water intake, water treatment). In this way a new waste recycling facility in Madrid, designed by Abalos & Herreros, becomes a popular family outing and a water intake structure (shown above) on the Sacramento River, by Lionakis Architects, becomes a destination waterfront park. 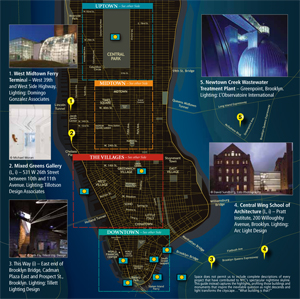 Instructional platforms:
Examples in this category typically unveil something, or a way of doing things, that wasn’t seen before, enabling people to engage with it collectively. For instance, the “nightseeing” map for New York City designed with the Illuminating Engineering Society of New York, provides people with a new way to experience the civic nightscape, bringing out different cultural and social meanings in the process.

What are some of the best platforms for ongoing participation that you’ve observed?