I am a few days late on the climate action blog post (action day was the 16th October). I want to divide this post into two parts. First if you’re just becoming aware or trying to inform yourself about climate issues. Second if you’re already active on climate issues.

In the first case, and on a professional level, a good place to start is gaining basic climate literacy (perhaps as part of gaining eco-literacy, so much the better). One could do worse than to watch Al Gore’s “An Inconvenient Truth”. Other sources on the basics include the Pew Center on Global Climate Change, or the Climate Literacy Network. On a personal level you can also calculate your ecological or carbon footprint (at bioregional, wattzon, or the Carbon Trust) and start figuring out ways to reduce it. This challenge is a good way to bring the issue “to life” in your design practice.

In the second case, you’re already active on climate change. Perhaps you are looking at energy efficient design, dematerialization, or reconfiguring transport. In my recent readings of some new books on climate change, such as Giddens’ The Politics of Climate Change and Mark Diesendorf’s Climate Action: A Campaign Manual for Greenhouse Solutions, I’m struck by the fact that the design of the built environment and manufactured objects is rarely mentioned explicitly.

Of course in policy proposals that deal with efficiency and transition, design is everywhere implied. Consider some of the following proposed policy directions for achieving climate stability:

But typically these policy initiatives are high level abstractions that don’t discuss what it means in design terms. Some design groups  join in on the policy level, for example Architecture 2030 and the American Institute of Architects have adopted policies for carbon neutral new and renovated buildings by 2030. The policy has subsequently been taken up by both the U.S. Conference of Mayors and the national Association of Governors. This policy starts to make a more explicit connection to design, but 2030 is a long way off. What about today?

How can designers make more explicit and purposeful connections with these broader policy-driven aspects of the climate stabilization movement? There might be several ways.

1. designers are in a position to help people imagine appealing, or at least workable, “if…then” scenarios. For example, if we each have a carbon budget of X then here are some attractive, or simply feasible, lifestyle choices and tools. I’ve seen a number of interesting design concepts for making energy “visible” in the home with glowing electrical cords, energy monitors, or this Danish project that lets you create an energy “cap” for your home and share energy rations among your appliances. But none of the concepts I’ve seen so far are explicitly linked to the idea of a personal carbon budget.

2. design can materially demonstrate the future in the present. For example, there are currently a number of building projects struggling to get to “carbon neutral” status. Interesting examples are Yale’s new Kroon Hall (School of Forestry and Enviro Studies) and the Aldo Leopold Legacy Center. These and other projects suggest a range of opportunities and challenges that show there is still room for radical thinking to get right down to carbon neutral, to cut the building’s energy load. My guess is that some of the change will involve social and not just technical approaches. What are we willing to live with, and without? In addition, product designers should think about their role in various carbon neutral building scenarios — what if it means smaller buildings? new social arrangements? different appliance systems? 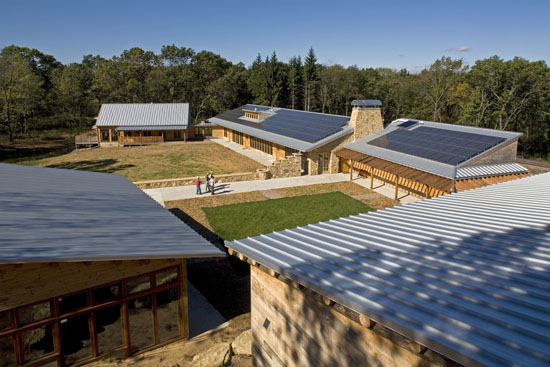 3. design is increasingly being recognized as a tool around which to build social infrastructure. A large task in the policy goal of “fostering transition” involves developing resilient and just social fabric, that is, reconnecting people and places outside of commercially driven contexts. Transition Towns (Totnes being the first one) have been good at this and bear further study. Another interesting group here in the UK, Glass House, has a good model for participatory design processes that fundamentally change communities, arguably preparing them to take on bigger “transition” tasks.

The important thing is to think about how to link explicitly to broader climate stability movements, rather than running along “in parallel” or worse, running in a different direction. Connecting with organizations in these movements may involve some convincing that design has an important role right now beyond the educational graphics that most social change groups might first think about. I note that there are many fantastic graphic design projects dealing with climate change and we need more of these as well. But designers working outside of graphics have the challenge of helping Climate activists to see ways to link abstract policy initiatives to actual spaces and lifestyles.

What are your thoughts on making this link?

A couple of other resources:
S. Peake and J. Smith, Climate Change: From Science to Citizenship. Oxford University Press, 2009.

Stephen Hale, The new politics of climate change: why we are failing and how we will succeed. downloadable here.