Alastair Fuad-Luke is a colleague of mine here in the UK and we sometimes end up speaking together or following in each other’s footsteps in one way or another. So I’m pleased to discuss here his recent book, Design Activism: Beautiful Strangeness for Sustainable World (hereafter referred to by the short title Design Activism) published in 2009 by Earthscan. 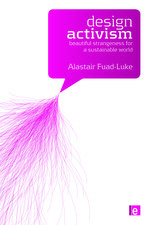 Design Activism’s main strength is its wide-ranging nature, and this is frequently a benefit of Fuad-Luke’s work, for example, with his Thames and Hudson publications, The Eco-Design Handbook (2009) and The Eco-travel Handbook (2009). In the first section of Design Activism, Fuad-Luke covers the activist territory very broadly, offering not only a chapter on the historical origins of design activism, but also providing a variety of frameworks for thinking about design activism followed by a broad range of contemporary examples. The final chapters of the book hone in on a particular process for participatory design known as “co-design.”

Fuad-Luke’s review of the history of design activism stretches back to 1750, taking in arts and crafts, modernism and other design movements. Most activism in these movements, he concludes, primarily targeted designers and in his view had little effect outside the boundaries of design culture. In some senses he sees the history of design activism as one of designers talking to themselves. Fuad-Luke doesn’t explicitly investigate the tension between the potentially conflicting roles of designers as “citizen activists” on the one hand and “professional experts” on the other. I suspect that designers’ roles as professional experts partly explain why they “talk to themselves” in an effort to change design culture toward more socially beneficial ends.

Diagramming the terrain
In the sense of diagramming design activist terrain, Fuad Luke has produced a very good initial reference from which to explore many dimensions of design activism. The book offers many frameworks for thinking about activism. For example Fuad-Luke presents the “five capitals” model of sustainability as a way to identify the range of causes, or issue areas, that activists might address, and he includes six separate diagrams (the five capitals plus other capitals) to show the dimensions that lie within each form of capital. He also diagrams various forms of eco-design and, more broadly, lists design approaches (some issue-led such as “gender” and some not, such as “design research”) and maps them on to contemporary activist causes (such as “participation and democracy” or “environment”). He offers a checklist for characterizing design activism, but also suggests a triangulation of design work among practice, exploration, and studies. And these are just a few of the many frameworks that appear on the pages of the book to explain not only the design and the design activist situation, but also to explain some of the causes (or issues) themselves, such as climate stability, ecological capacity, and over-consumption versus under-consumption.

But as the previous paragraph probably begins to suggest, Design Activism struggles a bit under the weight of so many frameworks. At times the reader wonders how to make sense of them, or which of them might fit together into a coherent, bigger picture. For example, having presented a number of frameworks early on in the book (five capitals model, design approaches, issue areas) for understanding design activism, Fuad-Luke doesn’t use any of those frameworks to organize his contemporary cases. I’d be the first to agree that there are no “right” answers when it comes to trying to categorize activism and the issues that activists address, and it is important to understand that there are a number of ways to look at this emerging field of work and study. However I do look forward to the next step of streamlining the large number of lists and diagrams down into a few more central frameworks for describing the range of activism and how it works .

Co-Design
The last section of the book deals with co-design, a form of participatory design. This section details the history of the co-design approach with respect to open source models and other related models (for example meta design, slow design, social and inclusive design) and offers a good process model for co-design. There is a chapter devoted to co-design tools such as social software for distributed collaboration and co-design events. Fuad-Luke links co-design explicitly to activism by proposing that, “participation emancipates people by making them active contributors rather than passive recipients. It is therefore a form of design humanism aimed at reducing domination.” Yet there is a slightly jarring contrast between the book’s first section of wide-ranging exploration and this sudden focus on one design process.

In many ways, it feels to me as though this second section deserved to be longer, or to be its own book. In such a short overview, Fuad-luke has little space to offer a critical examination of the strengths and weaknesses of participatory processes, nor can he fully explore the spectrum of uses for participatory and collaborative design, from commercial, non-activist projects to what I would characterize as activist. For me this section of the book leaves us with a provocative question about whether and how it may be appropriate to view activism, such as co-design processes, as a tool of design rather than positioning design as a tool of activism.

The participatory discussions also emphasize, more than other elements, the strangely apolitical nature of the book. Although it’s true that in broader civil society activism is arguably becoming more cultural (for example dealing with issues of identity, rather than issues of civil rights), activism’s core is still highly political. I sense that Fuad-Luke, like others in design culture, is more comfortable within the confines of design’s traditional organizing principles such as client service, usability, the design “project,” human needs, or “doing good by design.” These concepts contrast fairly sharply with more conventional activists’ language that deals in rights, struggles, grievances and claims. This gap suggests to me we still have a way to go until we really understand design as activism.

Strangeness in the title
The reader must continue to the end to find out about the book’s unusual subtitle. Fuad-Luke comments that conventional notions of beauty are those that align with financial profitability, a profitability that is ultimately destructive in social and environmental terms. He argues that instead, “we need new visions of beauty–we could call this beauty, ‘beautiful strangeness’, a beauty that is not quite familiar, tinged with newness, ambiguity and intrigue, which appeals to our innate sense of curiosity,” a beauty that, rather than stemming from profits, stems from resilience. Positioning of the goal of activism–its destination–in aesthetic terms is important for a design audience, but selection of the word “strangeness” strikes me as unfortunate given the weight of negative connotations that terms such as “activism” and “sustainability” already confront. We are in need of more resonant rallying cries, and the book does offer these within its pages.

I recommend Design Activism as a useful overview of activism within design culture. The book covers a valuable range of conceptual and case material and represents an important step on the way to rethinking design practice.

Filed Under: resources
← finding a job in sustainable design or a role in design activism
activism at Arup and elsewhere →