What motivates design activists? In the past few weeks I’ve come across a few cases that have made me think about motivations. Are some motivations better, or more authentic than others? Does the level of authenticity, if it could be measured, influence the nature of the activism or what it can accomplish? To what degree should we dismiss the activism of a well known, successful designer as less authentic?

One newspaper story I came across this week was about a young woman, fashion designer Tala Raassi, who as a teenager in Iran, had been punished with 40 lashes for wearing indecent clothing according to Islamic law. Upon emigration, her motivation to design swimwear and to turn her design work toward causes, grew directly from the experience (The Sunday Times front section, 29 August 2010). Her t-shirt line, lipstick revolution, pays tribute to women fighting for gender freedom and the name refers to the early years of the Islamic revolution in Iran when women wearing red lipstick was considered an insult to Islamic martyrs. That sounds authentic. 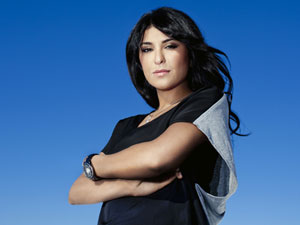 In the style section of the same newspaper was an article by a celebrity jewelry designer, Laura Bailey, who tells of her experience creating a line of fair-trade jewelry with the company Made, at their workshops in at the slum Kibera in Kenya. Bailey didn’t seek out the chance to design for Made, rather, it was a challenge to her that came from Made via a mutual celebrity friend. Although Bailey was already active with some charities, responding to this request made an impact on her. She writes, “What I’ve seen today has changed the way I feel about shopping — I want to know that whoever makes my clothes, jewellery or bags has been properly respected and rewarded” (The Sunday Times Style section, 29 August 2010, p 28).

And what does Made accomplish? Made says,
“Established in 2005, the made brand unites designer fashion with the principles of Fair and Ethical Trading, as an alternative approach to conventional trade. Our goods are produced by independent artisans and small communities in Africa. We provide living wages and healthy working conditions along with information and business planning to help workers develop sustainable businesses.” That also sounds authentic. 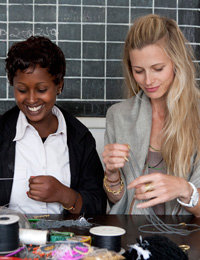 I also came across the story of Kate Cross, a deaf audiologist, who teamed up with a jewelry designer to create bejewelled hearing aids in an effort to reduce the stigma associated with them. The “hearrings” dissociate hearing aids from geriatric equipment, giving them potential as fashion accessories similar to eyeglasses. Hearing loss is on the rise yet people wait a very long time before admitting they need a hearing aid. This project addresses a growing health problem–again, it sounds authentic. 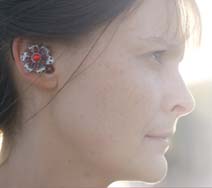 Here we have three different motivations. In the first case, the designer is self-motivated to use her work to fight injustices that she herself suffered. In another case, a celebrity responds to a request to design on behalf of a fair-trade effort. She is motivated by others, by a client, but is then changed by the experience. In the third case, a person who is in a minority, in this case by being deaf, deploys the power of design in order to address the problems she and others in her minority experience. This is the case of a user directing design as activism.

Activist Rinku Sen, in her book “Stir It Up,” describes different types of activist work that might help us make sense of these cases. She characterizes activism in these five categories:

organizing: people doing it for themselves–people suffering from an abuse or injustice taking action themselves to correct it such as fighting for civil rights or access to decent housing, and this often leads to new organizations being formed. Community organizing involves the long term engagement and leadership of those who suffer most in current conditions.

services: providing services to those in need, historically services such as job training, legal aid and so forth.

advocacy: lobbying for and acting on behalf of a group in need, without much involvement from that group. An extreme case would be advocating for the environment where it has no means to advocate for itself, but degrees of advocacy exist for many different groups and issues in society.

mobilization: large scale show of concern, such as petition signing or marches, but without expectation of repeat or continued involvement of the participants.

solidarity: efforts to change the terms of cultural discourse, through opinion pieces, framing of the issues and so forth.

Sen notes that these are all legitimate approaches to social change, even though they have their own methods and, perhaps we might add, motivations. (Sen, Jossey Bass Publishers, 2003, p 25). Here we can see, perhaps, how different circumstances of motivation might lead to different types of change work. In turn we might observe that activists blend and move among these different types of “change” work–perhaps as motivations change. The question of authenticity in activism is much less clear when we consider this range of types, or even “degrees” of activism.

None of these types of work is “wrong” and arguably all accomplish something. Probably they accomplish more when they are working in tandem, across a movement. So I don’t think we can dismiss the efforts of large, successful design firms, for example when they get government contracts that end up allowing them to transform the nature of public buildings. Similarly I don’t think we can say that direct engagement of disadvantaged user groups is the only correct way to work for change. Rather, across the board we probably need to keep the notion of integrated strategy foremost.

If your thing is public engagement, then make sure it is synergistic with advocacy and solidarity efforts, and so on. If you’re an advocate, perhaps through the promotion of eco materials and technology, then mind the benefits you might gain from partnering or learning from organizers and mobilization. Recall that social change is a collective effort and there will always be many players on stage as well as different levels of influence. Authenticity of motivation is perhaps less important than what it leads to in these terms.

I’m interested to learn where your motivation, or interest, in design activism comes from–please comment with a few words about this. For the moment my work sits in the solidarity and perhaps advocacy category with opinion and research pieces like this one, but I have moved around in these categories in the past and hope to keep doing so.

Filed Under: case studies
← notes from England (North of London)
Design for social impact-is it activism? →