Design for social impact-is it activism?

Have you been reading some of the interesting stuff about design for social impact? For example, The School for Visual Arts has recently finished up its summer workshop, “!mpact: Design for Social Change” which introduces participants to “the growing field of design for social advocacy.” One of the particularly interesting projects there was an effort by Claire Manibog, called Design:Effect, the outline of a tool that would help designers figure out the social return on investment (SROI) from their work. SROI includes all the benefits (“returns”) that typically are difficult to measure in monetary terms. (See for example this report from Demos, Measuring Social Value. I also have a section on these types of values in my book, The Designer’s Atlas of Sustainability).

an image by Claire Manibog from her proposed SROI tool for design, read and see more at her blog

Meanwhile there’s an interview on Core77 with Mariana Amatullo of the Design Matters program at Art Center College , which is introducing a new concentration in art and design for social impact, whereas before they operated mainly by project. Core77 also carries a column by Cameron Tonkinwise at Parsons The New School for Design, about the political intricacy of design for social innovation. He’s spurred to address this question by his work with Desis (a project I’ve written about before here) and a Parsons’ Desis project called, “Amplifying Creative Communities.” 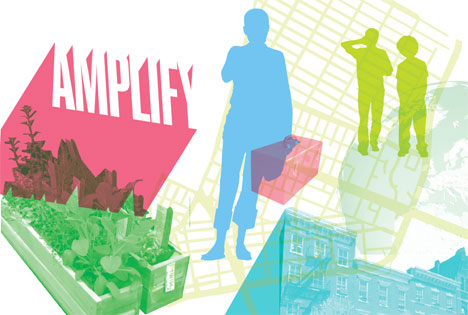 an image from the Amplifying Creative Communities project from their website, which contains information about their exhibition, interactive map, etc.

Tonkinwise makes the argument that designers might think they are avoiding politics by simply taking a “do good” ethical position, by creating positive social impact that works. But he makes a compelling argument that this type of apolitical ethical stance becomes a political one because without aiming to change broader systems, it accepts the status quo for everyone outside the scope of the project to hand. For example, he reasons that by using design to create social services (such as senior care) to replace shrinking government resources, then you are, by default, supporting “smaller government,” which may or may not have merits, but does constitute a political position. By not connecting to issues at the scale above the project, this kind of design work might enable the kind of status quo it aims to remedy with its project. He says, “In other words, being ethical, in order to avoid politics, is a political position.”

In this sense, designers working on social impact sometimes, and somewhat naturally, tend to focus on the project scale and see the users and clients as the targets, rather than thinking about their work in broader terms–for example, in terms of social movements for change. The field of design has adapted “change” and “social impact” agendas to fit within design’s traditional goals and orientations such as “human needs” or “usability.” This contrasts with conventional activist frameworks around rights, struggles, grievances and claims.

Activists are overtly political, and, as the term “activism” suggests, take public actions to call for broader change, typically targeting wide audiences and specific decisions makers. Effective activism occurs in ongoing campaigns that are strategically targeted and respond to countermoves by those maintaining the status quo (or worsening it).

So as Tonkinwise suggests, all design for social impact is political, and we might argue that whether consciously or not, it is activism. It calls for social change, but typically it is activism of a relatively weak or unstrategic kind. Tonkinwise suggests that design-based social innovation (read here design for social impact) should be connected to systems of lobbying for wider change, beyond just the project. In a sense he argues for the necessity of social impact designers becoming much more strategic activists, and I agree. I would add that designers would benefit from a closer study of how activism works, what tactics it uses and where its power comes from. We need a better understanding of design as activism.

This blog, DesignActivism.net, is part of a larger study where I’ve looked at this question of how design works as activism, as well as how conventional activists might understand design as a tool of activism. I’ve been sharing some of my insights with you through these posts, but soon I’ll be looking for some input from you on how you’d like me to share my “big picture” on how design works as activism. Look for this in the next post.

Filed Under: Activism: big picture, case studies
← motivations and strategy–cases from fashion and jewelrey design
7 questions about “the harvest” →

6 Responses to Design for social impact-is it activism?