Recently two examples of design activism came up on my radar at nearly the same time, and they were of such different scope and scale that I wanted to mention them. The first case is a small project that drew attention to leaking pipes and the resulting “scum river” on the sidewalk in a neighbourhood in NYC. Some of you may have seen this short video describing it. The project resulted in media coverage and soon after Amtrak fixed the leaking pipes. Jason Eppink’s (the designer’s) account is here and offers more photos like this one (borrowed from his site): 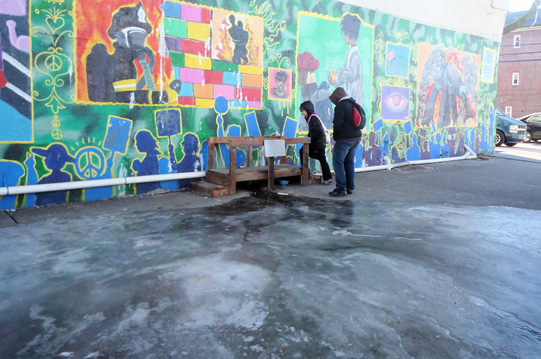 The other example is not as recent but probably resurfaced due to the disaster in Japan and the implications for nuclear power. In this case artists were enlisted to design markings for a nuclear waste facility that would alert future human beings to the waste’s ongoing danger, long after current civilisation may have been destroyed, forgotten, or even “erased”–for example due to climate change disaster.

This 2001 report from Archaeology magazine gives a short summary, whereas an original report from the U.S. DOE (Dept. of Energy) is available here.

Inspired by significant archaelogical works from the past, designers came up with menacing earthworks, including a large spike field inspired by past archaelogical finds. Although the results of this project were less specific than “scum river,” the project results have resurfaced and further amplified the mounting concerns about nuclear power.

The projects raise a host of interesting questions–but they both flag how an actual or proposed spatial intervention can aim to improve things in unique ways, in ways that a petition, a protest march, or a manifesto can’t.

Filed Under: Uncategorized
← Designers in a new “collaborative” brand called Common
An event and a short paper on defining design activism →