When I first heard about the idea of a collaborative brand I was intrigued. The message came in a tweet from Project M’s John Bielenberg, “world’s first collaborative brand.” I promptly retweeted (follow me on twitter @atlasann), but also watched a video of their launch.

The idea is that you can shift a brand’s value to the community, so that collaboration has the advantage over competition. The team (including Alex Bogusky and Rob Schuham of Fearless Media) want to help organize consumers so that they “demand more” in terms of social and environmental benefit, and in terms of what business organizations give back to a community. 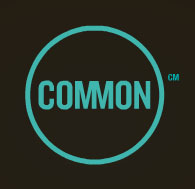 In response to their argument that the duties of “citizen” and “consumer” are colliding, they attempt to introduce democratic politics to consumer branding. In an era when the size of multinational corporations overshadows the size of governments, and individual consumerism powers the global economy, they argue that voting isn’t enough anymore. No argument here!

They describe their brand as three main elements. The first is a powerful brand backed by a coherent community (they call it the new capitalism community). Bogusky mentioned the likes of the Virgin brand, and asked, what if, by following some guidelines, you had access to the virgin brand. In this case the guidelines, or rules, would be developed by the community which designs and owns the brand. Thus “Common” is organized as a cooperative, rather than a nonprofit. 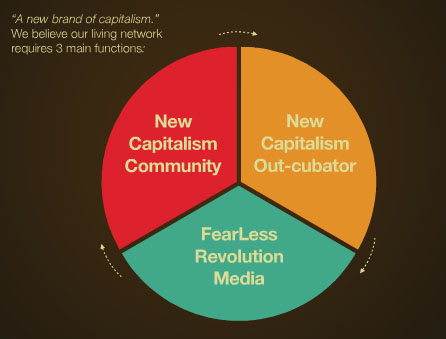 Three elements of the Common network, from the launch video

The second element of the plan is a way to facilitate the creation of organizations that will take up the Common brand. This element is where Project M comes in. Project M found that you could release designers into the wild for as little as 2 weeks, and they not only addressed community needs, but often ended up forming businesses inadvertently. This is the model of community-designed and -owned business development that Common would like to follow, encouraged along by an “out-cubator” process. It is in this “out in the wild” out-cubator sense they see a big role for designers and other creatives.

The third element is Bogusky and Schuham’s Fearless Revolution Media, which has the role of spreading the word, particularly aggregating the community’s results and amplifying their work.

By way of explaining how this might look Bogusky used the Virgin analogy. What if you were opening a new pizza place, and you had access to the virgin brand so that you could open as “Virgin Pizzas”? Under the Common brand, this new pizza place owner would have access to a similarly powerful brand. My question is, what if this pizza place is on the low end of the price scale and a high end pizza place opens down the street. Are they also going to want to be “Virgin Pizzas”?

They might, if both these pizza places are owned by the Common cooperative–the new capitalism community. It would be a sort of cooperative franchise model (I guess?). If, by contrast, these are separate businesses, each with different owners but both interested in the Common brand, then Common begins to look more like a rating or labelling system.

Common might be a more holistic label perhaps, but sits alongside more targeted labels such as “organic,” “fair trade,” or “energy star.” It becomes another mechanism through which businesses compete. The Common co-operative becomes the group that decides what standard must be met to use the Common label, akin to how the US Green Building Council (a broad-based nonprofit group) decides (and continually revises) what standard must be met to achieve LEED platinum, gold, or sliver ratings for buildings.

I think Common is on the right track to explicitly address ownership, and I hope that they are proposing a sort of cooperative franchise model. Many more questions arise in that case, but we won’t explore them here.

I was reminded of a discussion I had a few years ago with someone who proposed “branding” the concept of sustainability. Why couldn’t sustainability work as a brand and be “sold” in a similar way? Keeping in mind that the basis of a brand is exclusivity, ownership and control, among other things, the answer is: because you can never “compete” over qualities that make up sustainability, such as clean air or happy families, that have no price, that can’t be “owned,” and whose benefits accrue to everyone, no matter who does the good deed of maintaining and protecting these qualities. Although marketeers might argue that these qualities of sustainability should simply have a price put on them, I don’t agree with that approach.

clean air: can’t be owned, benefits accrue to everyone, no matter who protects or maintains it.

Common seems to be arguing two main points. first, rather than exclusive ownership, we tackle the problem of not being able to keep sustainability’s qualities “exclusive” by mirroring openness in the brand (any individual can join) and turning the emphasis to the collective, rather than the individual. This is a bridge–between individual and community–that is arguable missing in much of modern life.

Second Common suggests addressing the problems of maintaining elusive qualities such as clean air and happy families not through price competition, which as discussed won’t work, but rather through democratic processes, such as discussion and debate, among members of the community, about what is important and how we prioritize.

The danger could be that as qualities such as clean air, healthy food, and restored ecosystems are championed by Common, its prices go up and it becomes, like most other green or ethical businesses, the purview of the well-off, those who can afford it. Arguably this is where broader political action engaging with governments, alongside consumer action, has a role.

Still, Common represents a very interesting experiment, with an ostensible role for design and creative initiatives as a starting point. How will cooperative, values-based ownership affect the commissioning and process of design? I would certainly join the cooperative. What about you?