Game designers as activists, no really

I’m showing my prejudice here, but computer and video games would ordinarily be the last place I would expect to find “socially responsible design.” Yet recent offerings prove me wrong. A range of new “serious games” (instructional, informational and educational) are tackling issues from obesity to climate change. 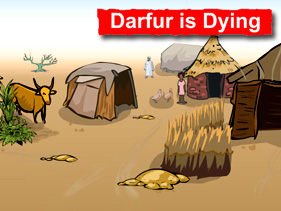 One example is Games for Change (G4C), a group that supports organizations using digital games for social change. I had a go with the game “Darfur is Dying” (note: this previous link loads the game.) In the game you assume the persona of a villager (I chose a young woman) and you have to go and forage for water amid threats from roving militias.

Despite its simplicity, the game did manage to give me a “feeling” of the refugee experience in a way that wouldn’t come through reading any news report. This is the simulation of experience– the interaction — that is so often missing from other communication mechanisms.
G4C has “game channels” covering human rights, economics, public policy, poverty, environment, and global conflict. Games are helpfully given age ranges (the age range is 18 and up for “Darfur is Dying”).

Games for Change has also recently released a “toolkit” for making social issue games, which, as commentators have mentioned, is really more of a tutorial for those who want to commission social issue games, rather than the sofware to create the game.

Persuasive Games, is another group which builds games for “persuasion, instruction and activism.” I had a look at their “Fatworld,” which they describe as a video game about the politics of nutrition. The aim is to help people see cumulative effects of diet and lifestyle over 10 or 20 years in a single game. Among Persuasive’s other offerings are “Food Import Folly” where, as an FDA inspector, you try to protect the country from contaminated foreign imports, and “Activism, The Public Policy Game” in which “players are challenged to balance six public policy issues with limited time and resources.”

Artist Kenneth Tin-Kin Hung has also entered the field with his Gas Zappers series of online games supported by the Tribeca Film Institute. I tried FOUR CO2UNTRIES where the polar bear (a central character across the games) attempts to block CO2 emissions from the 4 top emitting countries of the US, China, Russia and India. I had some trouble playing, perhaps due to a finicky internet connection, but the graphics are something else.

In another vein, “Game Designer” is a 3-year research project funded by the John D. and Catherine T. MacArthur Foundation, to develop educational software “that introduces junior high school kids to the craft of video-game design.” In an article for Metropolis (“The Principles of Play”, by Peter Hall, September 2006), the head of the project, Jim Gee comments, “I was struck by the fact that games are very complex, and often long and difficult. I wondered why kids spend so much time on tasks in these problem-solving spaces yet we have so much trouble getting them to do the same thing at school.” Game Designer aims to change that by putting students in the “producer’s seat” where, through designing games, they use their technical, artistic, cognitive and linguistic skills in ways that are unheard of in a standard curriculum.

It’s clear that the value of “media literacy” and of simulating experience are being applied to public service through, of all things, game design. Many of the games, such as Darfur is Dying, have metrics to try to measure their social impact — how often the game is played (2.5 million times by 1 million people), the amount of press coverage generated (quite a bit), and the estimated number of people who took real world action because of playing the game (25,000)

The whole notion of social issues digital games brings up for me two related areas in other forms of design activism. First, designers, particularly architects, have long used games to elicit user participation in the design process (for example Henry Sanoff’s work). Can they take that work online? Second, there is the issue of general cyberactivism and its various forms. How will these evolve to encompass design disciplines and their versions of activism?