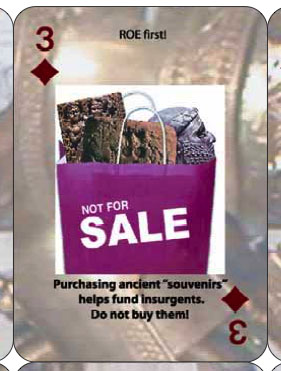 Sticking with the “game” theme (see the last post on computer games), This post starts a 3-part series on card decks and how design activists have been using them.

Designers have a history with card decks, and among the more prominent examples are the Eames’ House of Cards (“Play it again” in Metropolis Magazine, June 2005). Another well known design entry in the card deck form is IDEO’s Method Cards. IDEO’s human factors team developed the cards, and they say the cards, “show 51 of the methods we use to inspire great design and keep people at the center of our design process. Each card describes one method and includes a brief story about how and when to use it.”

The US military is making use of a deck of cards to encourage cultural preservation in Iraq. Susan Yelavich, writing in I.D. Magazine (“Face Facts: The deal about playing cards,” November/December 2007) recalls that this is a considerable step forward from the military’s 2003 use of cards to alert soldiers to “most wanted” Iraqis. The preservation cards don’t operate in isolation, rather they’re part of a larger set of tools including a mock heritage sites used in training. This package of tools won an award of recognition

The preservation cards don’t work so much as a card game but more as a puzzle. The cards from each suit combine to create a larger image, parts of which serve as the (somewhat distracting) background to the message on individual cards. You can download a PDF of the cards. 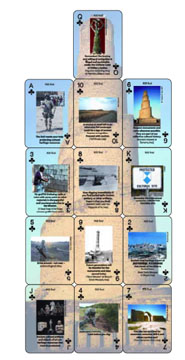 the clubs suit combines to form an ancient minaret in Samarra, Iraq 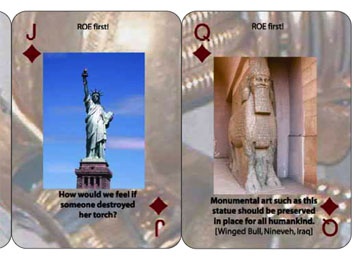 A related technique links the cultural heritage of Iraq to the world’s meta cultural heritage, pointing out that Christian ancestors (such as Jonah of the Bible) are believed buried there. A number of other cards provide techniques for identifying ancient artifacts and structures (whether buried or above ground) and/or give instructions for how to avoid damage (for example, “drive around, not over, archaelogical sites” and “don’t buy or sell artifacts”).

The cards also offer techniques to anticipate cultural heritage sites and artifacts, for example suggesting that if soldiers find a “defensible position” it probably has been used for centuries and may contain artifacts. Similarly another card suggests that village elders are a good source of information about local heritage.

The US military is not generally known for its progressive activism, with policies that preferred to ignore excluded groups within its ranks (such as the “don’t ask, don’t tell” philosophy around gay and lesbian soldiers), and much worse to those outside it. And some have argued that this effort amounts to too little, too late. But I’d like to view these cards as a positive step toward cultural sensitivity, which if done well enough and widely enough, could ultimately help prevent these types of conflicts in the first place.

Next week I’ll look at card deck used in landscape design to cultivate sense of place.