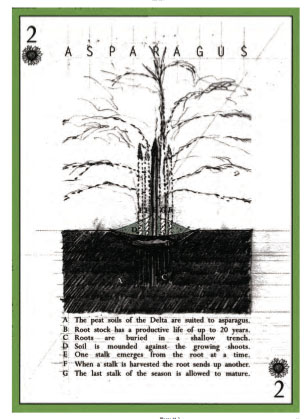 In this part of the series we look at a designer’s deck of cards aimed at cultivating a sense of place and at penetrating complexity of place. Jane Wolff’s Delta Primer Playing Cards are a companion to her book, Delta Primer: A Field Guide to the California Delta (William Stout Architectural Books, 2003). Wolff, a landscape architect currently based at the University of Toronto, uses the hand drawn cards to analyze and describe the competing interests among water, land and people in the delta, where the Sacramento and San Joaquin Rivers meet.

Although the Deck can be used to play games, it also offers a layered and unexpected view of the landscape as the cards are randomly accessed and juxtaposed. Instead of the conventional 4 suits, Wolff’s cards offer alternative suits: Machine, Garden, Toy and Wilderness. Toy includes items such as boats and names, whereas machine includes topics such as dredgers.

Other reviewers (John A. Loomis in Architectural Record, January 2005 and Mark Anderson in Places 16.2), have commented on the fact that the format of the card deck, combined with supplemental information in the book, serve to highlight a much broader range of information, capturing more complexity and layering, than would typically be available in a narrative of the California Delta. 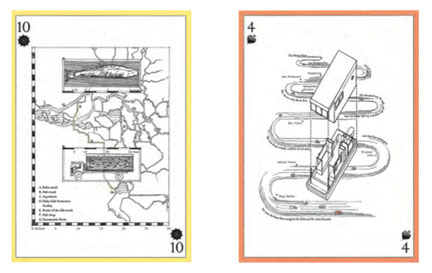 The machine suit (left) and the toy suit (right)

The freeing of information from a narrative structure, combined with the visual and map documentation, brings the place alive in a dynamic, questioning way. The format also suggests an appeal to a wide range of stakeholders concerned with the ongoing struggles over the delta.

In the final part of this series we’ll look at an example where designers used a deck of cards to enable a community and we’ll reflect on the card deck format in terms of what these three examples have shown.