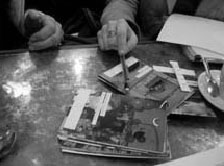 In this last part of the series on how designers are making use of card decks for social and environmental change, we look at a European case. Designers Francois Jegou and A. Bernagozzi collaborated with the Paris-based design school, Ecole Nationale Superieure des Arts Decoratifs, on ways of cultivating promising social innovations.

Their project included “Enabling Cards” based on the Logement Intergénération (“Intergenerational Lodging”) initiative and realised by L. Bayon , M. Jaloux  and V. Willerval within the workshop “Scenarios building for a more sustainable everyday” held at the Paris design school in 2008 (all images courtesy of the design team). I’ve written about this project before, and they’ve written about it here.

The intergenerational project arose to meet the needs of elderly inner-city residents living alone and transient students who could rarely afford inner city residences. As the authors describe,

“The challenge of Logement Intergeneration is tightening the precious bonds between different generations in a society where these are becoming more and more loose. The older person and the student form a kind of “new family” and the affection that they share makes both forget their respective feeling of loneliness (students often have to move miles away from home and feel lost in a metropolis like Paris) and helps them share unexpected interests and passions. This new stimulus helps the elder to feel the need of improving his social life (going out, etc.), sharing his feelings with somebody ready to listen and tackling daily actions that isolation normally discourages (cooking, cleaning, etc.). On the other side, the student gets a solid point of reference on which they can count.”

So where do the cards come in? Well, the process of creating these new “couples” –student with senior — requires that the intentions on both sides of the prospective pair are fully compatible, especially in terms of mutual aid. The process of discovering compatibility by way of negotiation through mediators that run the “matching” service was time consuming and slow.

Enter the “enabling cards,” which are used to pictorially prompt discussion on a wide range of issues that confront the older person and the student in determining their compatibility. The cards also allow the two to explore the issues autonomously, rather than relying on a negotiator to bring up each issue. The designers note that the key point in establishing a successful match is for the individuals to leave no issue unexplored, from the mundane to the intimate: celebrating each others’ birthdays, tidiness, smoking, overnight guests and so forth.

The cards help the prospective couple broach delicate subjects by showing the issue from each perspective, both the older person’s and the younger person’s, to establish from the start a sort of reciprocity. For example, it is not only the younger person that may want to have a boyfriend or girlfriend stay the night. 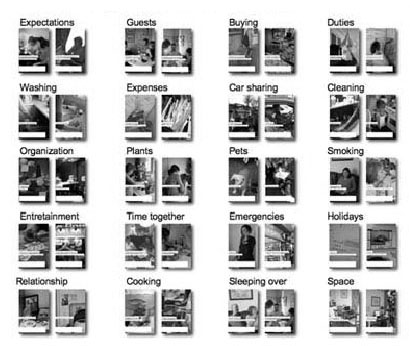 In addition to the pictures, designers used key words to highlight the issues. They printed cards on both sides, trying to highlight both ends of the spectrum on each issue, such as private versus shared, early versus late. In addition to practical matters, the cards also emphasize other realms, such as relying on each other, exchanging know-how and mutual empathy. 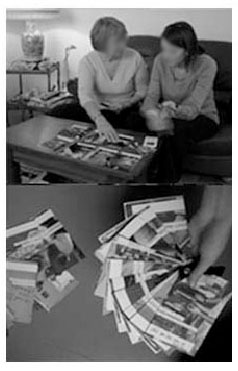 The designers suggest that the benefit of the cards is in “proposing a renewed image of both youth and older age” in which stereotypes are more easily avoided.

When the prospective cohousing couple has “played” with cards enough, they conclude with a set of cards that “anticipates the story of their life together.”

Reflecting on card decks in design activism
Narrative is an interesting element running through all three examples of activist card decks, particularly in that each use the format of a deck to do something different with a storyline.

In a sense, the enabling cards are used to build a narrative about a cohousing pair, in contrast to what seems to be the benefit of the Delta Primer playing cards, which is to deconstruct the narrative of a place in order to increase its accessibility to all. Finally, it strikes me that the cultural preservation cards for Iraq are trying to highlight, confirm or even promote a pre-existing, ancient narrative, about the territory of Iraq as the cradle of civilization.

The power of the card deck in bringing about change seems to be in how it offers us new and particularly visual ways of telling our stories. Once we’re able to see our stories in new ways, there is the possibility that we’ll start acting in new ways as well.