Occasionally I get notes from readers who are working on interesting projects. From time to time I’d like to present short “round ups” of the news I’m getting. Here’s the first:

Are printed magazines dead? Should they be, from an environmental standpoint? Antonio Scarponi, in Zurich, sent me this set of instructions for how to make something new out of your old copy of Wired magazine. You can make a DVD sleeve, an envelope, a wallet, and so forth. 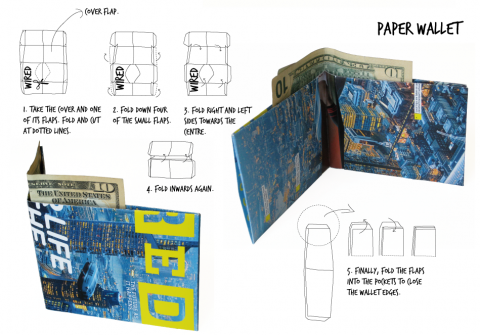 The project was part of WIRED’s launch in the UK and Italy and one may ask, is it really activism? Although it may not be radical or new (I recall seeing folded wallets made out of the currencies of fallen dictators), and the audience for WIRED is hardly downtrodden, the project does engage people in issues of materials and reuse. As I wrote in my sustainable consumption article, instructions rather than things, and doing rather than having, are probably central to a “low product” economy.

Alexander Levi, of Schachter & Levi, SLO Architecture in New York, sent me information about Bronx River Crossing an outreach project that he is working on with his colleague, Amanda Schachter, along the Bronx River.

The two architects are currently Van Alen Institute New York Prize Fellows, and the project involves working with Bronx high school students and teachers, as well as others in the community, to collaboratively design and build a large, floating model of the Lower Bronx River Watershed which was then floated across the river. The aim of the project is to “physically activate and recast” the Watershed as “the ecological and social spine of the borough.”

The model towed along the river 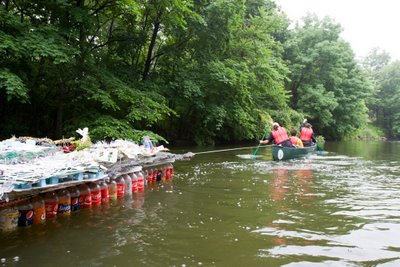 The floating model is made of
“3,000 used MetroCards, 30 broken umbrellas, 2,000 plastic bottles, 300 sycamore burrs, and 50 PVC window frames hauled off a demolition site”

close-up of the model 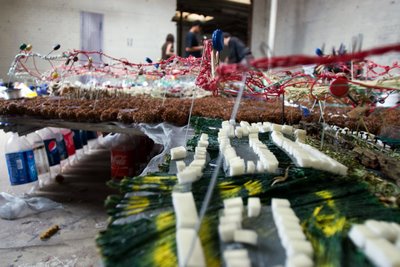 The project parallels Levi and Schachter’s design of the Bronx River Community Charter School that will be located near the Bronx River. The school plans to make the river a main line of the curriculum emphasizing ecology and community activism.

This project brings to mind the bioregional quiz, “Where You At?” developed by Charles et. al. (1981) and which I include in my book. The quiz as well as the project suggest we should all know things such as where our drinking water originates, where our waste goes, the identities of our native plants and animals and their seasons, and a number of other aspects of our regional ecologies. It suggests, in essence, that ecological literacy is fundamental to design as well as to cities. Bronx River Crossing engages people dynamically in these issues.

Kathi Stertzig alerted me to a project in Berlin addressing design’s role in collaborative, open innovation. The project, which ran in June, was part of the International Design Festival Berlin, and sought to bring a group of international designers to a community to study, interact and collaborate. The designers proposed ways to leverage existing skills, facilities, and relations to improve communication and relations within the community. 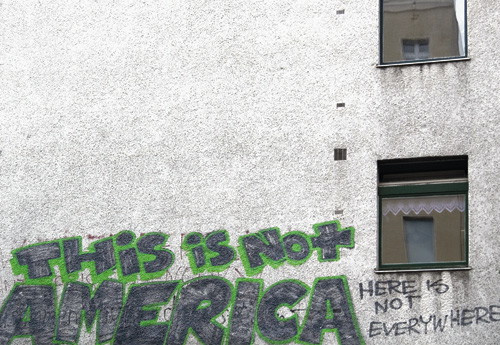 The neighbourhood around the Wrangelstrasse in Kreuzberg has been through difficult social and economic times but has seen more creative professionals coming to the area recently and wanting to contribute on the terms of the pre-existing community.

I’m looking forward to finding out what the designers proposed and how the community responded. This model of “co-design” seems to be on the rise, and often as a political as much as creative action, but it would be useful to see more results.

Kara Pecknold, of Vancouver Canada emailed me about her project in Rwanda on Visual Coversations. She said, “The reality is, in Africa particularly, one more product isn’t going to do what people might imagine it could.” Her work involved helping a cooperative of weavers with their graphic identity and a website, although the weavers had no access to computers or internet. Realizing that a shared language and assumed technologies were not present, Pecknold worked with visual design approaches that created a shared process. Pecknold used portions of IDEO’s “Human Centered Design Toolkit” (about which she’s quoted in FAST company here) and created this 7 minute video that provides an overview of the project.

The “field desk” in action 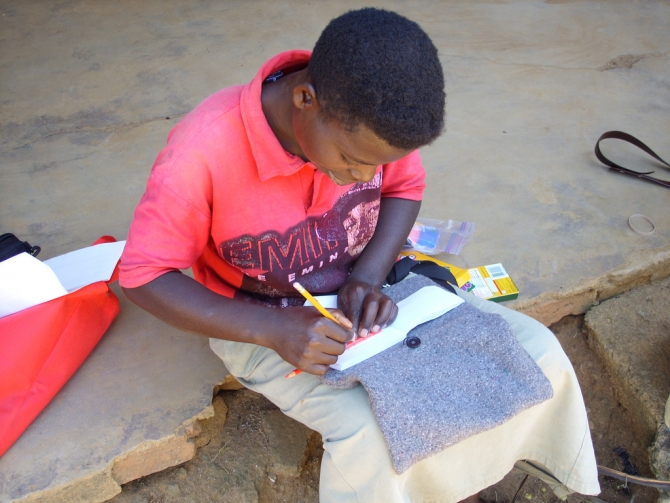 Pecknold’s project engages with the increasing awareness that “developed” countries have gotten plenty of things wrong whereas developing countries may in fact have approaches or models that might benefit developed countries. As I noted in a previous post along these lines, both industrialized and developing countries need new development paths and those paths could come from anywhere. As Pecknold suggests, the question of what “languages” we use to share these paths is critical.

More?
Have any comments on these projects? your own interesting project? get in touch or leave a comment.