coming across chemicals: in plastics and in schools 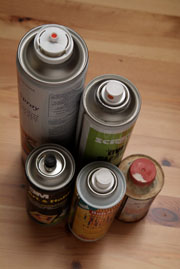 Chemicals have a been a theme for me over the past few weeks. First I had a reader inquiry challenging the idea that there could be any health risks from plastics in food and drink packaging. Then, I had a run-in with my son’s school over a new, portable classroom that wasn’t properly aired before his class started using it, making the indoor air of very questionable quality.

A reader of my Designer’s Atlas of Sustainability wrote to challenge the idea that plasticizers and other chemical additives in plastic could cause a health hazard. She argued that with today’s strict regulations there is no risk of harm from plastic food packaging.

In the book I talk about about a range of issues concerning plastics and more generally, chemicals. For example, I discuss downcycling and suggest that plastic drink bottles remade into textiles contain chemicals that aren’t intended for contact with skin. I also note that there are nearly 100,000 chemicals in use, few of which have been tested, and given the way our eco-sphere works, these all end up back in the environment in one place (such as our bodies) or another.

In responding to this query I noted that recent research (reported in the Guardian Newspaper) adds to the evidence that substances contained in many common plastics, including rubber used to make clogs, are absorbed through skin contact. (The Guardian Newspaper also produced a special report called “Chemical World” a few years back that is still relevant). 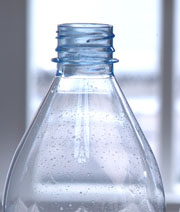 However, the main problem with the chemicals is that not enough of them have been properly tested for health effects, and the result is that we only regulate chemicals that we know about. A classic example is BPA, a chemical additive found in bottled water containers, baby bottles and the like. Last year mounting evidence about adverse health effects from BPA caused it to be withdrawn from the market.

The long term solution to this problem is hatching in the Green Chemistry movement, which is aiming to put the burden of proof of safe chemicals on the manufacturers. Currently a chemical is innocent until proven guilty, however, there are simply too many chemicals and, based on the evidence we do have, no reason to assume their innocence. Proposed green chemistry policies also recognize that health problems might arise for interactive, multiple exposures.

In confronting the school I also had some evidence to hand. Children are more susceptible to environmental contaminants because they breath more, relatively, than adults and they behave in ways that put them in closer contact with their surroundings (crawling on the floor, putting fingers in mouths etc.). Poor indoor air quality can result from a combination of factors, such as poor ventilation, chemical emissions from new construction and finishing materials, mold (particularly in carpets) and so forth.

In addition, there are several organizations concerned with school design, and not only indoor air quality. The Collaborative for High Performance Schools (CHPS) has a good report on indoor air quality on its website, along with other resources. Together with the state of California, CHPS tested a number of materials for off-gassing of chemicals, and the findings are also available on the CHPS website in the Low Emitting Materials Table. In the UK there is a similar oganization, the CIBSE schools design group.

Another group concerned about schools, environmental contaminants, and health is the Children’s Environmental Health Network. Their report “ABCs of Healthy Schools” details many areas of concern for new school building as well as finding and eliminating problems in existing settings. The American Architectural Foundation also hosts the “Great Schools by Design” program that publishes a number of reports on their findings.

With chemicals the main challenge is what we don’t know. There are some things we do know, such as some of the air quality or platicizer issues mentioned above, and where possible we can aim to make those problems and solutions more widely visible, and to disrupt routine practices that make use of bad chemicals. The struggle in this regard is that many of these bad chemicals are still legal, and many of the practices, such as putting children in an improperly ventilated new classroom, is also within regulations. My son’s school is “looking into” the issue, but it comes back to the point that as long as it meets regulation, there is little justification for remediation.

Here it makes sense to join up with groups, such as those mentioned above, that are already working on these issues. I’m reminded of a quotation from architect Teddy Cruz who, working on an affordable housing project with a nonprofit housing group, noted that part of the design process was explicitly political–to find a way to change regulation, “the project became a political instrument to change code” and the construction became a political framework.* But this kind of work is not contained within a single project. Cruz comments that although he has built a number of buildings, it takes time to build a political position.

For the many problems we don’t know about, we may need to consider more old fashioned collective action. For example, if you are a member of a professional design association (even if you’re not), urge your association to support green chemistry legislation so that individual consumers and designers are not stuck trying to find research to determine the safety of any given chemical.