Results of the design activism survey

Thanks to everyone who completed the survey. One lucky person has won the $50 gift certificate (to be named upon confirmation). In the survey I asked seven questions to help me shape my results on design activism into something that you can use. Well over 100 of you took time to reveal a bit about your interests in design activism — and here’s what you said…

I asked you to tick all the categories that applied to you in terms of your relationship to design. About 90% of you work within the field of design, either as practitioner, manager, scholar, researcher or student. Less than 10% of respondents were interested in design activism from outside the field of design. The bar chart looks like this: 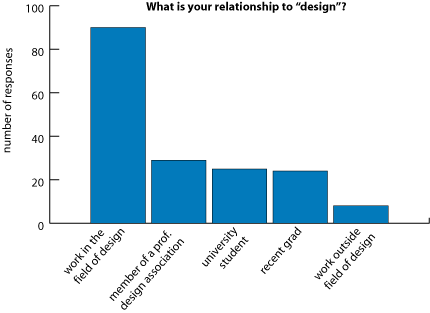 Another question asked you to tick the two design disciplines that most interested you. I was surprised that the highest interest was in product design (about 64%) and new media (39%), followed by urban design (30%) and architecture and graphics (both at about 28%). [In response to a comment on the Social Design Notes blog–I think the higher interest from product design (and the disciplines showings in general) say more about who’s reading this blog than about how the disciplines are engaging with activism].  Behold the bar chart: 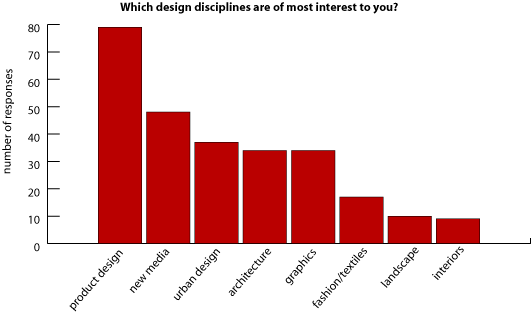 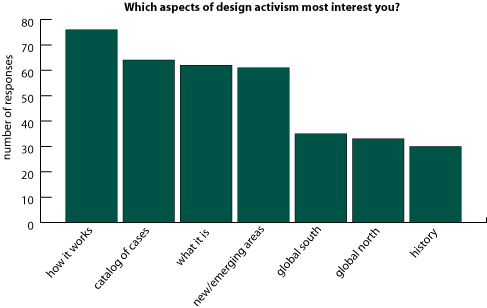 How You Act on Information

And what do respondents do with the information they get about design activism? Respondents chose their top three uses and about 68% of you said you use it in research, while about 50% use it in professional practice. Nearly 50% will teach with it, and 30% will apply it as an individual citizen. About 28% want simply to learn more about it and 22% will use it in studies. 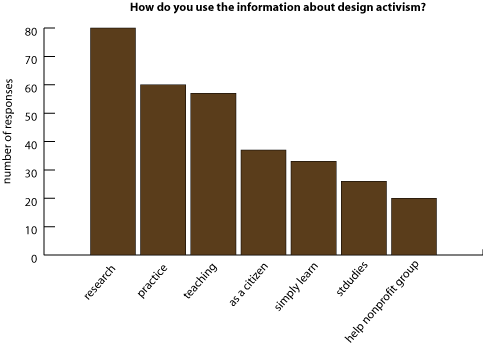 I asked what two sources on design activism you would recommend to a friend or colleague. There were 83 individual responses, with only about 10 people saying they weren’t sure what sources to recommend. But 73 responses is still too many to list individually so I can summarize by listing sources that were mentioned more than once. What is perhaps striking is that out of 73 informative responses, only a few of the sources (mostly books) were listed more than twice. So there’s quite a diversity of information out there.

Books mentioned more than once (book links are to Amazon)

Design For The Real World: HUMAN ECOLOGY AND SOCIAL CHANGE

Eternally Yours: Visions on Product Design

The Designer’s Atlas of Sustainability: Charting the Conceptual Landscape through Economy, Ecology, and Culture

(perhaps not surprising since it’s my survey, and this is my book, but thanks!)

Do Good Design: How Designers Can Change the World

Magazines mentioned more than once

Organizations mentioned more than once

Online sources mentioned more than once

Designactivism.net (again, perhaps not surprising since it’s my survey, thanks!)

There were a few interesting comments about sources. For example, one person suggested, “Any design blog should do. Design is being used in an activist fashion even by designers who are unaware they are doing so.” In a similar vein, more than one person suggested online searches, for example typing the term “design activism” into a search engine, into Wikipedia, or Amazon. Perhaps these are a good reminder that the field is evolving and new sources are emerging.

How you would describe it

I also asked how you would describe “design activism” to someone who isn’t familiar with the concept. There were over 100 individual responses to this question, with only about 7 people unsure how to describe it. Here again I’ll have to summarize some of the trends in these many very thoughtful responses.

Most of the responses centered on the idea of design having a role in positive change, but there was an amazing variety of interpretations of these ideas. Some people focused on the idea of raising awareness and communicating about beliefs and values, whereas others concentrated on an explicit political role. For example, contrast the idea of “drawing attention to societal issues” with the idea of taking “a more explicit political stance.” A few respondents seemed to interpret design activism as activism on behalf of better use of design.

There was also a lot of variety in terms of how people characterized “positive change.” For some respondents it was simply a question of “making the world a better place” and for others it had more specific elements such as “advocating for under represented groups” and specific causes such as peace, civil rights, poverty, and the environment. A number of respondents emphasized positive change as requiring a substantial movement away from the goals of commerce and the economic growth agenda.

Thanks again to all who participated.

2 Responses to Results of the design activism survey