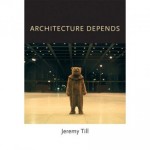 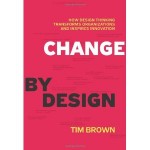 I wonder if I’m the only one who read Change by Design: How Design Thinking Transforms Organizations and Inspires Innovation

(by Tim Brown) and Architecture Depends

(by Jeremy Till) back to back. The effect was very interesting in that Brown seems to provide a description of design operating largely as Till suggests that it should, but doesn’t, in architecture.

Till, Dean of the School of Architecture and the Built Environment at the University of Westminster here in London, paints a devastating picture of architecture as a profession largely turned in on itself, desperate to minimize its engagement with the messy world and keep architectural knowledge centered on “the object”. Till argues for the idea of “architectural intelligence” — a position that allows architecture to shift its focus from the object to the task of making social and spatial sense real life problems. (see some of Till’s work on architectural agency over at www.spatialagency.net)

In contrast to the problems that Till identifies in architecture, Brown, head of IDEO (originally a product design firm), presents a picture of design as a process of engagement with real life problems that works not only for designers, but also for business people, governments, and social change organizations. (I profiled some of IDEO’s more activist work here) This is the idea of “design thinking” which in Brown’s estimation is too important to be left only to designers.

Although Brown writes very much in a business context and Till in a more academic one, the two messages are strikingly related…Architectural intelligence–the architect’s version of design thinking. Till explains why architects resist the notion, but Brown goes some way toward showing its contours, as I describe below.

Till skillfully argues that architecture has long thought of itself as “autonomous,” part of the modernist project to “order,” particularly through the manipulation of form. Architecture in this sense fails to engage with the “lived world.” In Till’s estimation, many architects resist engaging with the everyday, with social, political, ecological and other forces that shape and influence their work and its success. These influences are the dependency suggested in the title–a dependency that architects want to deny–which Till describes throughout the book mostly as contingency. It is only by avoiding these contingencies that architects can pretend to create order or have social relevance through the manipulation of form alone.

Brown seems to answer this with his discussion of the Shimano bike company that undertook a human-centered design exploration. Instead of focussing on Shimano’s high end market, the design team tried to learn why 90% of adults don’t ride bikes when 90% of them did as kids, and why most people have bikes in the garage that they don’t ride. Brown comments, “Shimano did not hand us a list of technical specifications and a binder full of market research and send us off to design a bunch of parts. Rather, we joined forces and set out together to explore the changing terrain of the cycling market.” In a sense, this project set out to engage with contingency. 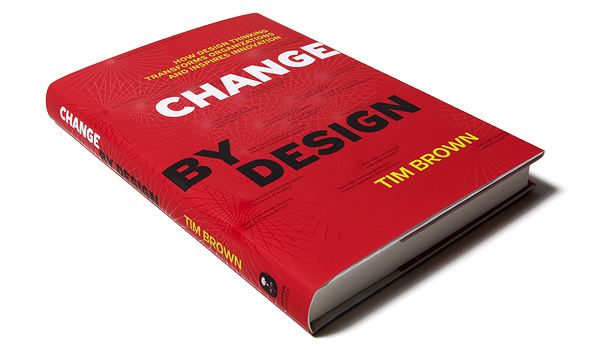 By contrast, Brown emphasizes the ultimate importance of getting off the beaten path–the importance of not having a big idea, and this often involves failure. An IDEO motto, for example, is “fail early to succeed sooner.” He argues for the central role of social and physical space where people–often from across stakeholder groups–can experiment, take risks and explore. For Brown these spaces are symbolized by the quirky work environments found at companies like Pixar or Google. He describes a process fed by his version of “design thinking” as open-ended, open-minded, and iterative, a process that will feel “chaotic” to those who’ve never experienced it.

On engaging with users
Till wants to see architects move away from merely polishing forms and techniques — the role they are largely trained for–and instead take on the role of gathering the conflicting voices in a given project to “make the best possible social and spatial sense of them.” One idea Till proposes is to widen the sense of “scale” in architecture beyond simply physical size to include social scale. 1:100, a common and preferred scale (detailed enough to seem real, not detailed enough to address the mess of actual users) becomes 1 architect to 100 citizens. The scale of a city, 1: 10,000, becomes a scale of narratives.

As if in response, Brown shows that gathering conflicting voices, which he terms “competing constraints,” is at the heart of the design thinking process. Designers need to be “out in the field” for the very purpose of gathering those voices. Although people often aren’t able to express what they want or need from a design project, designers can learn a lot from observing actual behaviors and listening to what people say (and don’t say) about what they do. “Behaviors,” he comments, “are never right or wrong, but they are always meaningful.” Brown notes that it is not observation of a statistically average user that yields the most insight, but rather observation of incongruous details and amateur practices, along with “the exaggerated concerns” of people at the margins of the intended user groups. This approach moves away from designers creating for people to a model of designers creating with people by understanding, and making sense of their stories.

On forms of knowledge
Till wants architects to see themselves as part of a network of knowledge that “weaves together human and nonhuman, specialized knowledge with everyday insights, rules with instincts, the social sciences with the social.” For many architects, he suggests, this stance would be threatening because it removes the imagined sense of detachment–the purity of architectural knowledge and its neat ordering–and replaces it with a messy, hybrid knowledge. But Till argues that “architectural knowledge, as situated knowledge, should not be applied as an abstraction from the outside, but developed from within the context of the given situation.”

Brown explains how design teams that embrace a more mature design thinking approach typically and by necessity create networks of diverse knowledge. He suggests we can think of a designer as “a master storyteller whose skill is measured by his or her ability to craft a compelling, consistent, and believable narrative. It’s no accident that writers and journalists now often work alongside mechanical engineers, and cultural anthropologists in design teams.”

On innovation
Till argues that not only have architects tended to seek the “ideal” or the “big idea,” and autonomy to pursue it against external pressures, but at the same time architects have tended to think that external forces are so overwhelming there is simply no room to maneuver. But he argues that a central benefit of architecture embracing contingency is that it offers the opportunity for architectural projects to become transformative–the contingency itself gives the maneuvering room–and for architects to shift from a focus on objects to a focus on agency. The shift in focus then brings out “architectural intelligence.”

In Brown’s terms transformation appears as “innovation”–which notably can be as much social as it is technological– and it marks the difference between mostly boring incremental changes and “game-changing” break-throughs that really deliver the “change” of his title. In Brown’s book, real innovation arises exactly from the contingency that Till so badly wants architects to embrace.

Design Thinking/Architectural Intelligence
Brown ultimately argues for “design thinking” to spread and be applied outside studios of design. He is asking for designers to design with people, possibly even facilitating a process where people design for themselves. Till is, for the moment, simply asking architects to step outside the studio, to step outside the ideal and to give up the notion that detachment is a desirable stance.

Sure architecture and ‘product’ (now often ‘service’) design are different. Products, like bicycles and kitchen tools, have to work for the consumer. By contrast an architect’s client can only rarely represent the actual users of any given building. Buildings are big, long lasting, and immobile, whereas products are small, often short-lived, and must flow into the jumble of daily life.

Although architectural projects face tremendous economic pressures, they don’t typically face the competitive “sales” pressure that consumer objects and services do. Indeed, Brown’s focus for innovation is largely for the purpose of corporate gains — to do what industrial designers have always done in terms of expanding existing markets and finding new ones. By contrast Till is more concerned with social change in civil society.

Naturally, each of these design disciplines wants to carve out a niche for itself, but if these two books are any indication, there is some convergence on where that will take design. The two disciplines are being hit by common forces such as global digital connectivity, changing expectations about what design can and should accomplish, and a more prominent social and public focus against a backdrop of global crises. In addition, the boundaries between the object and the structure, the user and the designer, and the design project and its context are all blurring.

Despite skepticism in the design world about design thinking, and the clear resistance that Till describes to the idea of architectural intelligence, I think these two designers are on the right track. In fact, I would have them go further in terms of reframing the design professions — but we’ll save that for later.

Did you read either of these two books? Thoughts?