In the previous post for this series on ethics I looked generally at how activism is typically triggered by ethical failures, and then examined professional duty of care as an area of ethical responsibility and the types of activism it typically generates.

Here I’ll look at some of the ethical issues associated with the production of products and architecture. In these cases the artifacts don’t fail in terms of safety or function, but they raise other ethical concerns. In this post I’ll briefly cover labor, the environment and consumer freedom.

what is ethical treatment of workers?
(image courtesy of The North South Project) 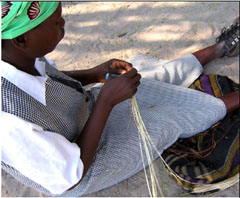 Labor, ethics and products
In the first area, labor, many of us may have heard about cases where expensive, designer or “name brand” items are produced in sweatshops or other unsavory conditions. Clothing and sports shoes probably come to mind. In addition, child labor has been implicated in production of rugs and cotton as illustrated in a recent Guardian article on child-labor in the Egyptian cotton industry. Recently some star architects’ buildings in developing countries have come under scrutiny for poor labor conditions on construction sites.

In all these cases the ethical question concerns whether it is right to exploit people who are in weaker economic and political positions–whether the reason for exploitation is to feed western markets for cheap fashion clothes or purely to increase profits on consumer goods. Are these financial rationales beyond morality? Are they so important as to negate any investigation of what may be right or wrong in how we achieve them? Note that in this post I’ll stick to consumer products and buildings, rather than looking at fashion.

cheap consumer goods: what are they worth, in ethical terms?

Western companies have sometimes held the position that they are not able to change the labor situation because the factories, fields or manufacturing plants don’t belong to them. Designers might make the same argument. “Client companies control productions decisions, not designers,” they might say. Examples of this response have come recently from architects working in Dubai (more below).

Moreover, companies see as their main duty the pursuit of profits for their shareholders. Indeed, as I wrote in an earlier post (“Is there a Fourth Sector?“), some US states make it a illegal for companies to let any interests (such as ethical questions) compete with shareholder interests, thus preventing companies from advancing other stakeholders’ interests.

But others, designers among them, reject the idea that exploitative labor conditions are someone else’s problem. Instead some people are beginning to embrace the ideas of “fair trade.” Below are a few design cases that explore the issue and illustrate the types of activism is seems to generate. 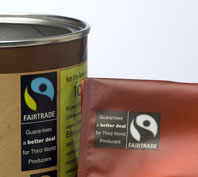 Furnishings
In terms of furnishings such as rugs, vases, or lamps, the concern tends to center on the working conditions for the people who make the products in low-cost over-seas countries. The aim of some of the fair trade initiatives has been to make sure that children are not being employed and that workers have fair working conditions and pay that constitutes a livelihood.

furnishings are a target for some design activists 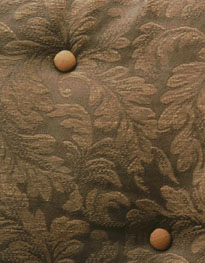 Designers have responded with a range of activist approaches. In keeping with much of the rest of the fair trade movement which many of us know by the fair trade label, some designers have aligned with the Rugmark Foundation, which offers the rugmark label. Profiled by Laurie Manfra (“The Ethics of Rugs: Can designers help eliminate child labor in the rug industry?” Metropolis Magazine, January 2006), the rugmark label is particularly aimed at ensuring that child labor has not been used in producing the rugs.

Other designers and producers have aligned with the crafts people directly in what some might term “community trade.” Working with Aid to Artisans,  at least one producer, Artecnica, (see the Treehugger interview and images) has linked designers directly to the artisans, giving those artisans the access to the designer market place.  (Note an organization somewhat similar to Aid to Artisans is Ten Thousand Villages.)

a craft worker from the North South Project 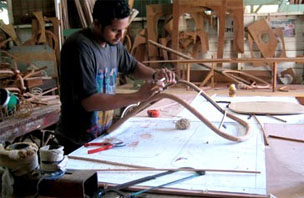 One designer, Canada-based Patty Johnson, formed a nonprofit group, the North South Project,  which aims to develop products made by craftspeople in developing countries that will succeed in Northern markets. The products are designed to highlight the skills and materials of the local region in the developing country. They also aim for ecological, economic and social sustainability both at home and abroad. 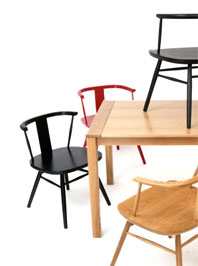 Rebecca Veit, writing in Metropolis magazine (“Design Without Borders,” September 2006 ) dubbed this the “altruistic marketplace,” and perhaps this is a good way to summarize this form of activism, as design for the altruistic market place.

Labor, ethics and architecture
Although we think about the ethics of labor mostly around products and clothing, architecture is also vulnerable. Recently several large scale projects in Dubai have come under scrutiny. Sam Lubell, writing in Architectural Record (July 2007, “Worker Abuses Alleged in theU.A.E“) about several key projects designed by “star” architects, notes:

“Human Rights Watch (HRW) alleges that the migrant workers vital to constructing these projects are subject to ‘abusive labor practices’–and architects, it contends, are complicit in the problem.”

In a follow-up article (“Few Assurances Made on UAE Worker Rights“) Lubell reported that although well known museums (such as the Louvre and the Guggenheim) and well known architects (such as Frank Gehry and Jean Nouvel) were being imported to the UAE to ramp up its cultural reputation, none of these individuals or organizations were willing to pledge assurances of fair worker treatment.

At the time of writing, Lubell reports, there were no pledges. In fact HRW said, “despite the letters and subsequent phone calls to these institutions, few have responded with ‘substantive’ comments.”

In a counter example to the ones reported above, Lance Hosey (“The Ethics of Brick” June 2005, Metropolis Magazine) reports on an architect, Max Bond, who uses material specifications to influence labor issues. Hosey notes,

“Researching the membership of construction unions in New York City, his [Bond’s] team learned that masonry unions include a relatively large percentage of minorities from Harlem. Accordingly the architects specified brick for projects such as Harlem’s Schomburg Center for Research in Black Culture. Bond says, ‘I have tried to make it as likely as possible that people of color would work on the construction of our buildings.’ The project reaches out to its constituent community not just through the end product but also through the acts of specification and construction. Call it ‘material justice’.” 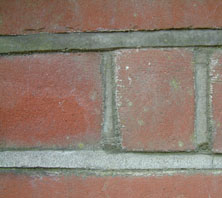 Environment and design ethics
Moral concerns about environmental destruction also drive design activism.  Is it right to destroy forests or habitats in pursuit of  consumer pleasures? For example, Alakeson et al, in their book, Making the Net Work, report on an instance where an obscure metal used in the Playstation 2 was responsible for destroying habitat of endangered Gorillas in the Congo. Playstation versus the Gorillas, what is the ethical thing to do?

Similar cases surround forestry and these have given rise to a number of wood certification systems, such as the Forest Stewardship Council label, which ensures a chain of custody for the wood from producer to consumer.

In addition to latching on to environmental labeling schemes, design activists have also formed a number of groups aimed at improving the environmental aspects of design. Examples of such groups include O2, the Scottish Ecological Design Association, or the Amerian Institute of Architect’s Committee on the Environment (COTE), to name just a few.

Design ethics and consumer freedom
Ethical issues surrounding design and consumers are appearing in a couple of interesting ways. In general the moral issue concerns how much “freedom” consumers should have in the marketplace, and what constitutes “freedom” in the face of commerce and competing social or environmental objectives.

The first question of freedom concerns products that control what the consumer does. I posted about this before in  “Can Artefacts be Activists?” Examples include computer printers with ink cartridges that “expire” after a certain period, whether or not the ink is used up. Is this fair? In a world of shrinking resources, is it right?

Dan Lockton, who is researching this subject, notes that if we combine current trends in digital rights management (that is, companies controlling their digitally-formatted intellectual property such as DVDs) with trends in consumer products, we could one day face the following situation:

“Imagine if you found that your expensive, top-of-the range new digital camera refused to photograph you and your friends standing in a city street because of a load of trademarked logos behind you. Or if your camcorder video of baby’s first steps cut out suddenly because baby walked in front of a TV?”

who is really in control?

Lockton, using the term “architectures of control” or “design with intent,” poses this question in a way that may cause alarm, but there is another aspect to controlling what users do with products. This alternative aspect is sometimes discussed as “choice editing,” which typically has as its end a social good, such as reducing environmental or social costs associated with consumption.

One example is  “design for behavioral change,” as Bhamra, Lilley and Tang describe it, and they point out the ethical implications of allocating the power of decision-making between the consumer and the product,  noting, “it is important to develop a balanced and ethical approach.”

For example, Bhamra et al’s research found that in loading groceries into the fridge, most of the time was spent making room for new items and transferring items between shelves. People generally had trouble finding what they were looking for and overlooked items were pushed to the back and then expired. A design solution that might reduce energy use (eg reduce door opening time) as well as food wastage might include a more adaptable fridge interior. Bhamra et. al. demonstrate the notion of design research as activism.

can design of appliances, or other artifacts,
help us form new energy-saving habits? 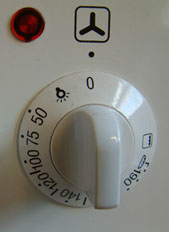 Designers create or make use of labeling schemes such as FairTrade, Rugmark, or Forest Stewardship Council wood certification. And given the development around digital rights management, one wonders how long it will be before we see some sort of label connoting ethical treatment of consumers, as well as laborers/producers.

Designers also create demonstration products and buildings that show an alternative to the status quo. In the case of fair trade this may result in products for the “altruistic marketplace,” or in the previously mentioned “material justice” where the connection between a labor group and a material determines the specification for a building. In the case of environmental issues, it may result in demonstrating alternative materials, more efficient processes or even reconsidering the product’s or building’s purpose and role from the ground up, to de-materialize it.

We’ve seen that designers also form a variety of different organizations to combat these ethical failure. Some organizations supply information to designers, others function more as design studios that produce alternatives. And finally, some designers are doing design research as activism.

In the next part (if you’re still with me) I’ll be looking at the ethical issues surrounding design activism for vulnerable populations, aside from workers/laborers.